A Neuroscientist’s Diary of a Concussion

Written for:  THE NEW YORKER 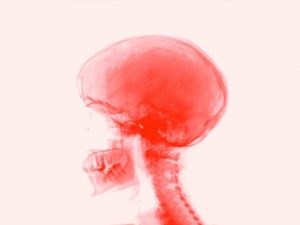 One evening in April, driving home from a university function, I was stopped in freeway traffic caused by roadworks somewhere up ahead when I felt a massive jolt. The back of my head hit the headrest, then my head lurched forward and I felt something hit the inside of my forehead with a squishy blow. Then my head snapped back and slammed into the headrest a second time. I didn’t feel any pain at first, just a stunned sense of disruption.

As a neuroscientist, I know a bit about traumatic brain injury and concussions. Sitting on the freeway, I went through a quick checklist in my mind: I hadn’t blacked out. I wasn’t dizzy or nauseated. This meant that it was unlikely I’d slip into a coma or lose consciousness in the critical next few hours. But I could feel a dull ache in the cerebellum, where my head had hit the headrest. If the impact had been any higher up, I thought, in the occipital lobe, I might have lost my sight or experienced hallucinations. The squishy sensation, I suspected, was likely my prefrontal cortex pushing against the viscous fluid that keeps it from the bone of my skull.

I did not want to move yet. I wanted to just sit. The young woman who hit me walked up to my window and asked if I was all right. She was clutching her cell phone. I wondered if she had been texting while driving. I knew that going to the E.R. would likely be pointless: concussions don’t leave any evidence that can be seen in CT scans and MRIs, and newer markers—cerebral spinal fluid and blood draws—are still being evaluated.

I also knew that after a concussion one can lose the ability to think clearly, and that I probably shouldn’t trust myself in this state. I called my longtime doctor, with whom I have a close relationship, and described what happened. He asked a few questions: Did the airbags deploy? Did you black out? Are you in pain now? Do you feel nauseated or dizzy? Can you wiggle your toes and fingers? We talked for a few minutes. He knows me well. I imagine he was trying to engage me in conversation in order to assess any cognitive change. Sensing none, he advised me not to go to the hospital, but to go home and start a post-concussion protocol. I should take a thousand milligrams of Tylenol to reduce pain, I should monitor my bodily states carefully, and I should ask my wife to wake me up in the morning, to insure that I hadn’t lapsed into unconsciousness.

My doctor said that I had probably suffered whiplash, something I hadn’t considered, and he predicted that my neck, forehead, and the base of my head would be very sore for the next few days. Other than that, he said, I’d likely feel normal for the first day or two. Brain injuries are like that. There are so many redundant circuits and so much neurochemical momentum that the behavioral and physiological effects of an injury can be masked for seventy-two hours.

He was right: for two days, I felt like a tight elastic band was wrapped around my forehead and the base of my skull. Otherwise, I was fine. But, on day three, I experienced the first sign of trouble. I’d begin a sentence as always, expecting the words I needed to magically appear—and then they wouldn’t. Speaking had always felt like that playground game of grabbing suspended rings on a climbing frame, the next ring just waiting for a free hand; now, it was as though the rings were disappearing just as my fingers were ready to curl around them. I had to stop where I was and hang, motionless, unable to move either forward or backward. My wife asked me what those specialized microphone jacks are called. It took me five minutes to come up with “XLR connectors,” a term I’ve known since I was twelve and use regularly. Disconcerted, I began keeping a log of my symptoms—the repercussions of my concussion.

Names were a problem, especially names that sounded similar. Trying to find the name “Mitchell,” I would instead say “Michael,” and then the memory-retrieval pathway would be blocked. In much the same way, words that were more common would crowd out those that were less. It was as though my brain were using Vegas oddsmakers to determine which I might really be after. Shortly after my concussion, I was scheduled to do an interview on BBC Radio. I called my publicist to explain that I had been in an accident and wasn’t feeling up to it. “I have a . . . a . . . percussion,” I said, instantly knowing that my hand had missed a ring. We cancelled all my interviews for the next few weeks.

On day five, I began to have difficulty sleeping. I have a mild form of narcolepsy, meaning that I fall asleep within six to ten seconds of lying down, and then sleep through the night. I also tend to have an overwhelming urge to fall asleep at one o’clock every afternoon—not the typical post-lunch tiredness, but a real biological shutdown for about ten minutes. I’ve been this way my entire adult life. Most cases of narcolepsy are traced to deficiencies in the production of hypocretin. Specialized hypocretin cells in the brain’s hypothalamus project to other regions of the brain that promote arousal and appetite. When everything is working well, they wake you up and put you to sleep at the appropriate times, according to a twenty-four-hour cycle. Narcolepsy occurs when the arousal mechanism is damaged—which might have happened, my neurologists and I speculate, when I was seventeen and came down with a bad case of the mononucleosis virus. But after the car accident I found myself waking up every half hour or so. It went on for weeks. Some nights, after awakening in darkness, I would stare at the ceiling for an hour or two. By day twenty-three, I had become a full-fledged insomniac.

Trying to keep up with the daily onslaught of e-mails and to-do lists was impossible: my mind wandered, and I was still having word trouble. This could all have been related to sleep loss, I knew, but I feared that the real cause was damage to my frontal lobes. Positioned just behind your forehead, they are the seat of planning, organizing, and concentrated focus. The prefrontal cortex and all of its GABA (gamma-Aminobutyric acid) receptors also allow for impulse control, which prevents you from shouting out things that will get you punched in a bar, and from giving into distraction when you’re trying to work.

Contemplating this, I began to cry. “More emotional,” I wrote down in my log. I realized that I had been far more emotional than usual in the past couple of weeks—crying at a sunset, a romantic comedy, and sometimes at nothing at all. Was my concussion making me more deeply connected to the world around me, or was I just crying without any associated gain in artistic and interpersonal sensitivity? Would my newfound emotional sensitivity make me a more compelling singer? When I tried a few old favorite songs, I discovered instead a total inability to sustain a pitch. My voice wasn’t just wobbly; it had lost its tonal qualities and no longer sounded pleasing even on short notes.

A few days later, my wife and I had sex for the first time since the accident. Just before the moment of orgasm, I developed a horrible, painful, immobilizing headache in the prefrontal region, which lasted for a few minutes, then subsided, then recurred throughout the rest of the evening. Two days later, when we tried again, I again experienced the headache, which recurred throughout the day. My chiropractor suggested that a nerve in my neck might be pinched, probably from the whack to my cerebellum, and he began regular neck adjustments. But I worried that the cerebellar damage might be causing other problems.

The cerebellum is the part of the brain responsible for maintaining a steady gait and fine motor control, but recent microscopic studies by Jeremy Schmahmann at Harvard and neuroimaging studies that I performed with my colleague Vinod Menon have shown that it contains direct connections to the emotional centers of the brain. This explained the crying. It would also explain the trouble I’d been having playing the guitar. I have been a musician for forty-five years, and now I couldn’t even complete my warmups. It felt like my brain was sending the right signal to my fingers, but my fingers were having none of it.

It took a month to slowly rebuild the pathways for fine finger movements, but my singing voice still sounded very unpleasant. I found myself thinking of Jeralyn Glass, an opera and Broadway singer whom I have known since high school. As it happened, she had recently moved back to L.A. to teach voice. I took two lessons with her, in which she figured out that my larynx had stiffened and had shifted upward in my throat, presumably from the whiplash. She showed me some exercises to do to loosen it up and get it in the right position, and then to strengthen it. Three months after my concussion, my voice had come back, but my concentration and stamina in my work were still reduced. I used to work until bedtime, or play my guitar after dinner with friends, or read a book; but now by 7 P.M. I felt completely spent. Writing was still difficult. Flow and lucidity had never come easily to me, but would reveal themselves with editing and focus, two things I now found difficult to do.

It has now been six months. The only effects still lingering are a loss of stamina, and the continued sense that my word generator has a bottleneck. I’ll use the words that I do have; others might take a little longer to locate. Sometimes, I wonder where they got to. I am reminded of Montreal, where I lived for seventeen years. Every year, hundreds of the roads would be blocked for months at a time, either from snow buildup in the winter or repair works in the summer. The entire city became an ever-shifting maze. Slowly, though, I built up a store of alternate routes that I could rely on, until the snow began to melt or the roadworks were completed, and the traffic could flow along its usual routes once again.